Use this Facebook Ad Campaign Method for Better Results

Facebook advertising has made significant changes over the years but one thing is sure, it has become a very relevant way to market your business regardless of industry. Today I'm going to give you some quick tips to make your next Facebook Ad Campaign drive more leads without breaking the bank.

"I've used Facebook to promote my business in the past by promoting my page, posts, and even created an actual ad campaign once. But nothing ever gained any traction and in the end I felt like it was all a waste of time, money, and energy."

If you've thought this or said this at anytime you are not alone. I have heard many variation of this statement about advertising on Facebook. The other thing I hear way too often is "Only big businesses with big budgets can use Facebook." or "Facebook is only used by 16 year-olds."

Facebook isn't just for big businesses or teenagers anymore. The average age of users in 2016 is 25 - 34 and thousands of small business find great success with ad campaigns. So when looking at Facebook as a way to promote your business it is a place to start.

The Key to Success

As we head into creating your next campaign remember to take things slow and not be afraid to try things. There is no failure , just review your progress and pivot in a new direction.

The first thing most businesses gloss over is creating relevant audiences. This is where the Audience Insights Tool in the Facebook Ads Management area shines brightly. Within this tool you can use all kinds of demographics to narrow down your audiences.

However, try to avoid an audience that is too large. For best results keep your audiences between 20k - 40k monthly active users, this will create a group that is large enough to gain good exposure while not sacrificing relevancy.

Also, notice I said audiences, plural, because all businesses have more than one audience. Whether they are serious or casual users, men vs. women, younger or older, I encourage you to go through your current customer base and see what kind of groups you can create. 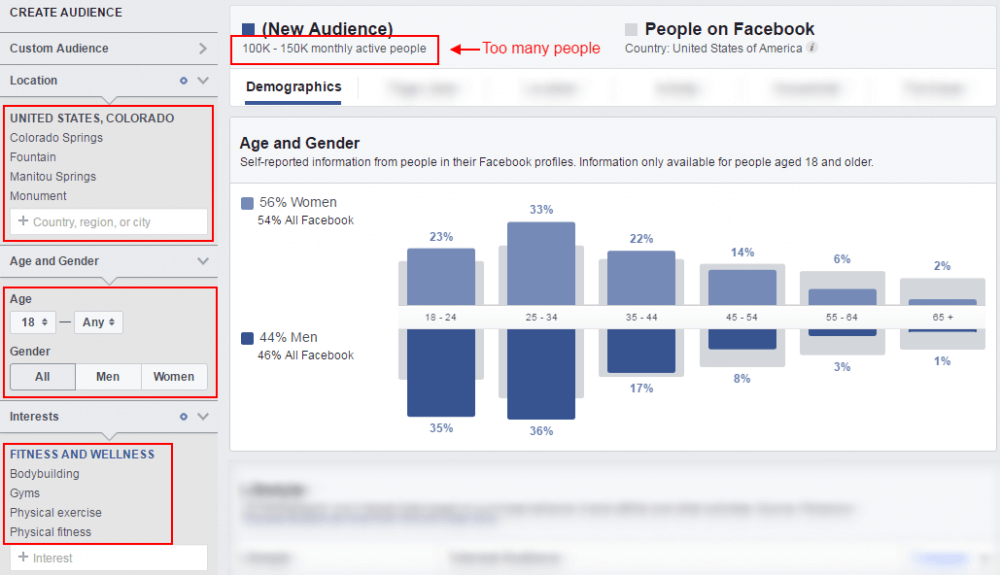 This audience is too large which may result in the ads not resonating well which will cause a lower conversion rate with higher cost per conversions.

This audience, on the other hand, has been targeted to reach a much more specific audience which will help with relevancy, interaction and cost per conversion.

These audiences will be used in your Ad Sets when creating your new Campaign, so try having a few audiences that are close with only a few differing factors like age, location, or interests.

The best method to execute a Facebook Ad Campaign is to use the A/B structure. Using multiple Ads in each Ad Set helps you better understand and interpret what that audience responds best to. If you only create one Ad you can't viably measure it against anything.

This method of setting up Campaigns is a great way to track which audience (Ad Set) is responding better to certain Ads. In turn, helping you develop a more successful Campaign.

This example Campaign's Ad Set audiences were split using age ranges. All of the Ad images were the same for both Ad Sets. You want to test which images/text work best with which audience so keeping the ads the same is important.

When creating a budget for your Facebook Ad Campaign, you want to make sure you allocate enough money for each ad to allow for a good exposure to generate results. Typically we start out by spending $10 per-day/per ad. This means with 2 Ad Sets that have two Ads you will expect to spend $40 a day. This can be adjusted over time, but be cognoscente of how many active daily users you can reach with each amount. (pro-tip: you can only change your daily amount 4 times in 24 hours and they take 30 minutes to take affect.)

As your Campaign ages you can start to see which Ads in each Ad Set are outperforming others and start allocating more of the daily budget to the higher performers or even create a new variation of an other Ad for each Ad Set. You can even turn off entire Ad Sets if needed. Just remember to allow time to pass before making changes, we typically review every 7 days. And don't forget to make small changes at a time, when you change too many variables at once you may not know which one caused the change.

I hope this quick introduction to Facebook Ad Campaigns motivates you to get started promoting your business. Facebook doesn't have to be intimidating. So get out there and play around, don't be afraid of failure - just adjust and move forward. And as always, if you need a little assistance all of us at Third Angle are here to help.

With a passion for helping people learn, she is the lead writer of The Weekly Angle email that helps small businesses learn marketing hacks to excel their business. A lover of movies, tournament paintball, and design, you can often find Sarah either on the couch watching a new great flick or at a paintball field.

Find it. Claim it. Update it. …But what was IT again?

We’re all in this together

What Growth to Expect from Your “New Website” Announcement & Other Expectations